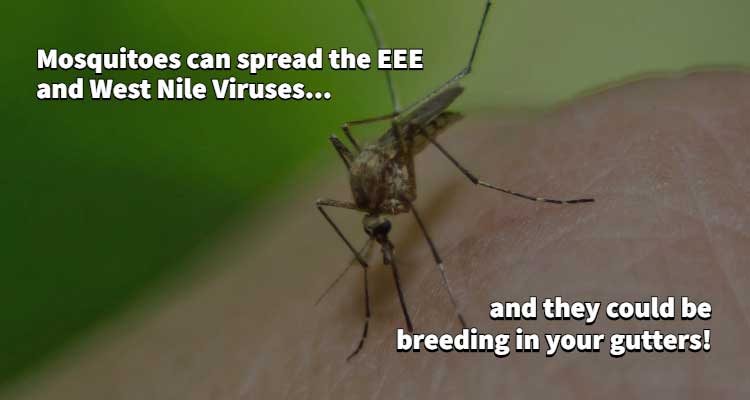 Mosquitoes in west Michigan have been found to carry the Eastern Equine Encephalitis and West Nile Viruses. It doesn’t take much standing water to breed a lot of mosquitoes. Are your clogged cutters the breeding ground for thousands of these potentially dangerous, disease carrying pests?

Due to the growing number of mosquito-borne Eastern Equine Encephalitis cases, state health officials have informed the public that 14 counties have agreed to aerial spraying for the pest. Counties that will be spraying for the pest include Allegan, Barry, Berrien, Branch, Calhoun, Cass, Jackson, Kalamazoo, Kent, Lapeer, Montcalm, Newaygo, St. Joseph and Van Buren. (The mosquito is also known to carry the West Nile Virus.)

According to information released by the Kent County Health Department, EEE is a rare, but serious disease that can affect anyone, but children and people over age 60 are more likely to get the more severe form of EEE illness. The virus can cause inflammation of the brain (encephalitis). Typically in the U.S. approximately 5-10 EEE cases in humans are reported annually. It is one of the most severe mosquito-borne diseases in the United States. As of September 27, 2019, there have been nine human cases within six counties in Michigan including: Kalamazoo, Berrien, Barry, Cass, Calhoun, and Van Buren. Three of the eight cases resulted in death. According to the Centers for Disease Control and Prevention (CDC), approximately one-third of the human cases of EEE are fatal. The EEE illness has also been identified in 27 animals. The animal cases have been located in 14 different counties including: Allegan, Barry, Berrien, Calhoun, Cass, Genesee, Jackson, Kalamazoo, Kent, Lapeer, Montcalm, Newaygo, St. Joseph, and Van Buren.

Due to this serious situation, many school systems are adjusting the start times of their sporting events. The games begin earlier in hopes of being finished by later in the evening when mosquitoes are most active. Wearing insect repellent when outdoors (especially at dawn and dusk) is also important to prevent EEE.

The Kent County Health Department put out a news release regarding EEE and the aerial spraying. You can read it here.

What can you do to keep your family safe?

Along with wearing insect repellent while outdoors, remove any standing water in your yard. It doesn’t take much water to breed a lot of mosquitoes. Just a tiny bottle cap of water can breed thousands and thousands of mosquitoes. Think about this…if you have clogged gutters around your home, how many millions of mosquitoes are being bred just outside of your door!

At Roof Cleaner we can clean and flush your gutters, thereby eliminating your yard of millions of these disease carrying pests.

Help keep your family and pets safe. (EEE infection in domestic animals, like cats and dogs, is very rare, but it is possible. Keep your pets inside as much as possible between dusk and dawn. Before using any insect repellent on your pets, contact your veterinarian for recommendations.) Schedule to  have your gutters cleaned as soon as possible. Call Roof Cleaner today for a FREE consultation. Our phone number is (616) 240-3465. Roof Cleaner services the West Michigan area hardest hit by the EEE outbreak.